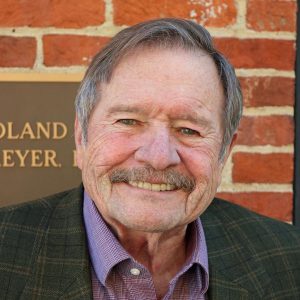 Baltimore Attorney R. Roland Brockmeyer passed the Maryland Bar in 1960, with the fourth highest score in the State of Maryland. From the very beginning, Roland had no desire to be a corporate lawyer and sit in the ivory tower. His desire was to fight for those less fortunate, be a people’s lawyer, and help those who truly had no one else to whom to turn for help. Mr. Brockmeyer was orphaned at a young age, dropped out of school in the 8th grade, and was a runner for a stationary store prior to enlisting for the Korean War. During his time in the military, he received his GED, took correspondence classes and received college credits, which enriched his passion for reading and education. Once he came out of the military, he used the GI Bill to go to night school while working in the steel mills in Baltimore.

Roland’s love for reading and his thirst for knowledge quickly landed him in law school at the University of Baltimore.   After graduation and passing the bar with the fourth highest score in the State, he started out with one client, one file and the love and support of his wife.   Since day one, clients have been drawn to him due to his empathetic style of practicing law, and his true desire to help those who had no one else.   Roland found himself doing the criminal trials on the Eastern Shore that no one else would do. Many days he stood in front of the Court of Appeals arguing for his clients who he truly believed in and fought for. But never was money, fame or the ivory tower his desire.  Roland’s passion has always been the well being of his clients.  Generations of clients have sat in his office while he wrote their landlords letters, helped with minor issues, and never charged a fee.   Roland has taken pride in charging low criminal fees and cutting his fees in accident work because it is just the right thing to do.  Everyone deserves to have not just an attorney, but an attorney and advocate who wants the very best for you without destroying you financially.  As Roland has stated for decades, hogs go to slaughter, I’ll never be a hog.  His true passion in life and his most proud moments have been caring for his clients.

In 1983, Roland purchased the “Chimney Corner Building” that was in tear down condition in Baltimore City.  Instead of tearing it down and starting fresh, Roland wanted to preserve an important part of the City’s history and had the entire building renovated to historical specifications so that it could placed on the National Historical list.  For 35 years, The Chimney Corner Building, which is the third oldest building in private hands in Baltimore, has been the home of the Law Offices of R. Roland Brockmeyer.  Every weekday, you will find Roland sitting on the second floor corner office of the Chimney Corner Building proud to be a lifelong Baltimore City business owner.   His days in the courtroom are renowned for his charisma – during his opening statements he would already have the jury nodding their head in agreement with him.  Roland’s success as an attorney is credited to his demeanor, charisma and true empathy for each and every client that has ever walked into his building.

While you won’t find Roland in the courtroom anymore (as he says “that is a young man’s game”), he is still sitting his office with clients,  using his famous charm and wit in talking to claims adjusters, making phone calls for his clients, dictating letters and helping the attorneys in his firm prepare for their trials.  For 58 years, Roland’s passion and drive have focused on three things – the client, the client, the client.